Here we bring all the possible reasons of why you should trek in the Himalayas-:

When we hear the word Himalayas what comes first to our minds is Snow-capped mountains. From Everest to Kanchenjunga to Ama Dablam, these peaks just put every adventurer in awe of the Himalayas. A trek in the Himalayas gives you a view of many such peaks. Of those, one trek which gives you an amazing view of Mount Kanchenjunga is the Sandakphu Trek. The Sandakphu is a peak in itself and once you reach the top you see the mighty Kanchenjunga, the Sleeping Buddha, and many other peaks. 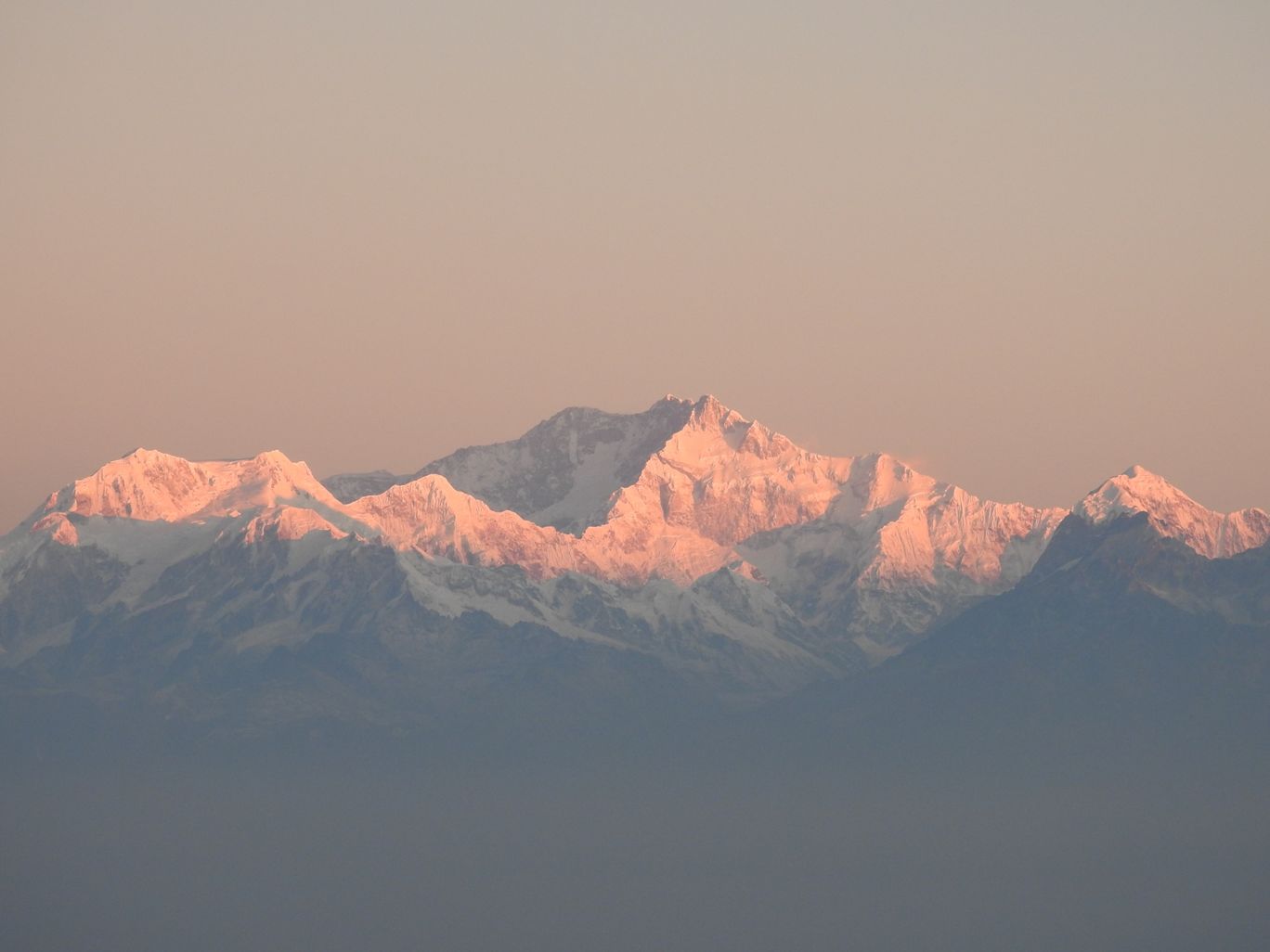 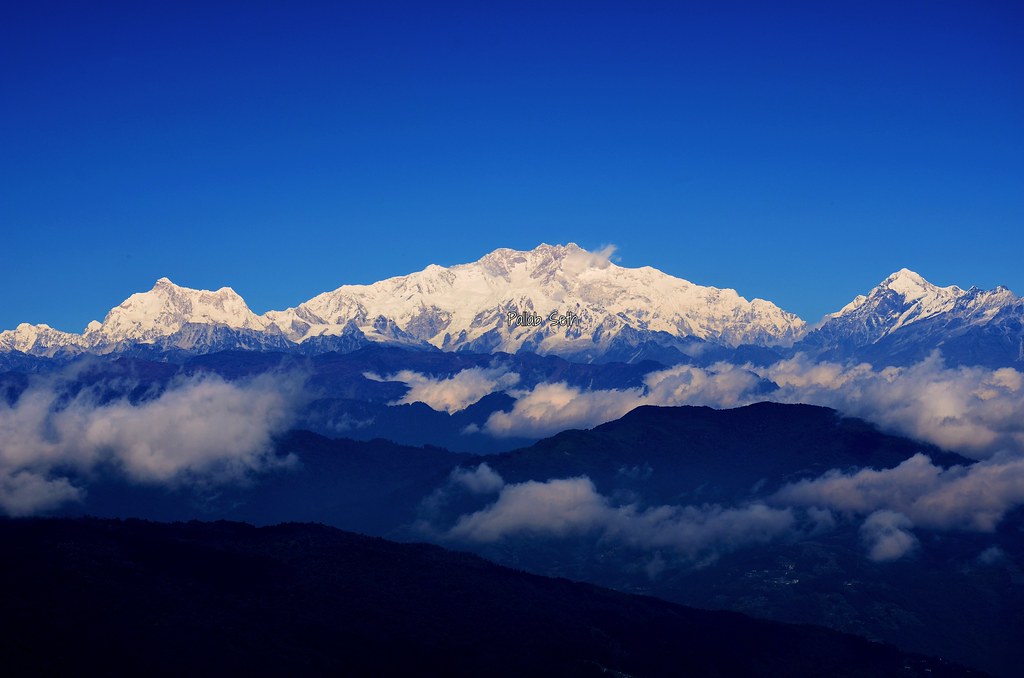 A trek in the Himalayas is bound to take you from dense forests. The flora is diverse according to the altitude and climatic conditions. You see Alpine forests, grasslands and finally the scrublands which lead you to the snowline. You can have the best experience of this diversity in the Nanda Devi National park which is also a Biosphere Reserve.

Imagine trekking through the National park and you see a black bear in the distance or you come across a Himalayan Musk Deer. There is great variety in the flora and fauna of the Himalayan forests. 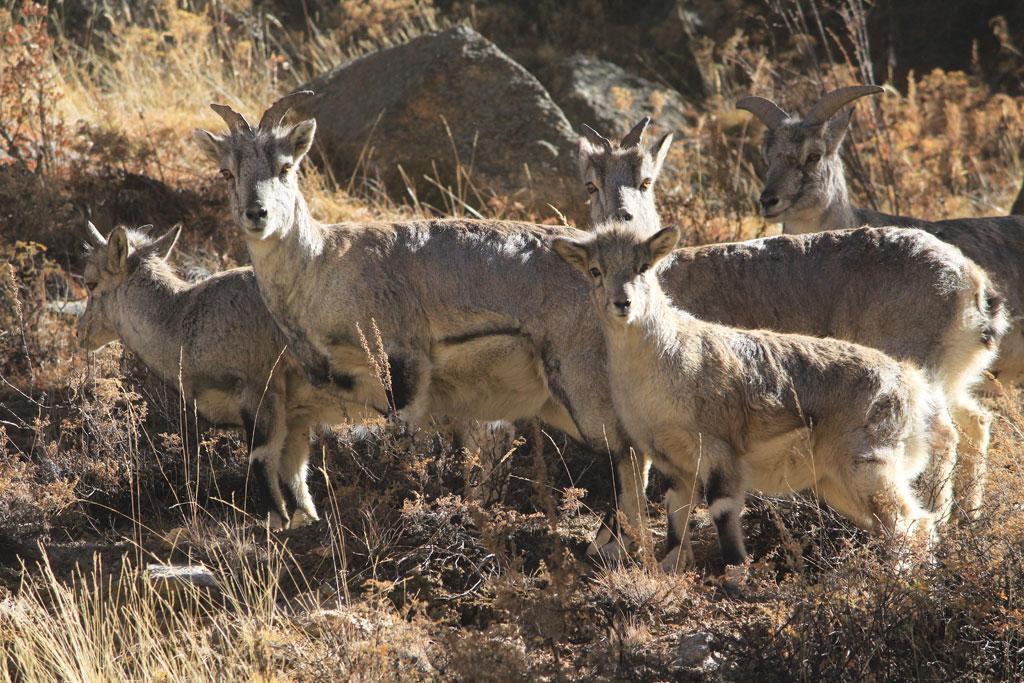 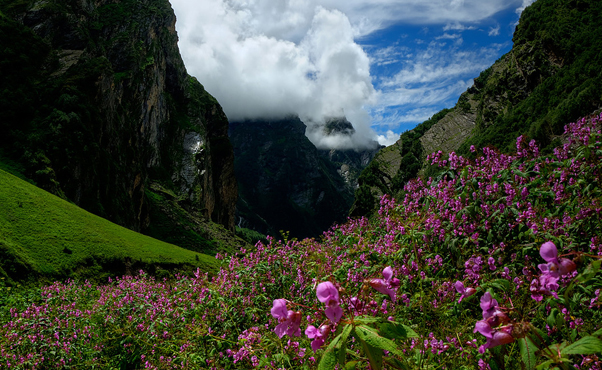 3. A Trek in the Himalayas for Beginners! 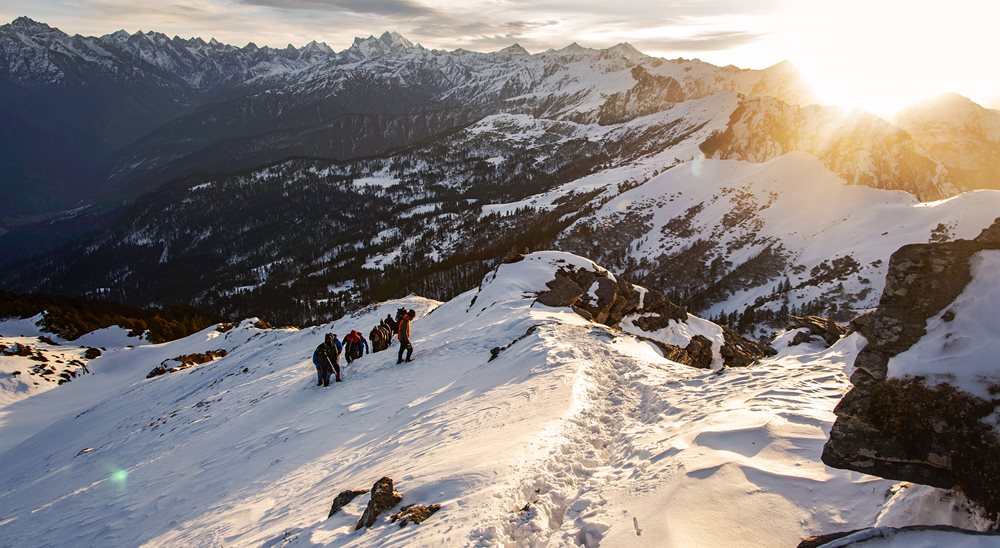 The Kedarkantha Peak at the extreme right

4. Beautiful Meadows in the arms of nature

A trek in the Himalayas is always bound to put you in the arms of nature. And how? Meadows! Whichever trek you do in the Himalayas you are bound to come across meadows which give you a beautiful view of the mountains. To give you an idea, the Gorson Bugyal in Auli is a meadow that you come across when on the Kuari Pass trek. The meadow is like a breather after a long trek. 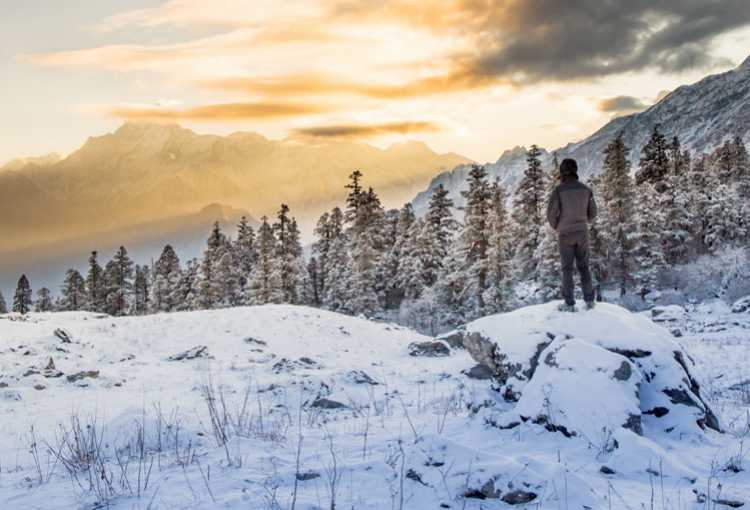 5. Trace the trails of Legends

The Himalayas has always been a subject of thrill and exploration for decades. There have been so many expeditions done by legends like Lord Curzon, Shipton and Tilman and not to forget Edmund Hillary himself. There are treks in the Himalayas where you can trace the steps of these legends. The Kuari Pass trek takes you right through the footsteps of Lord Curzon. In your trek to the Valley of Flowers, you walk the footsteps of the legendary mountaineer Frank Smythe. 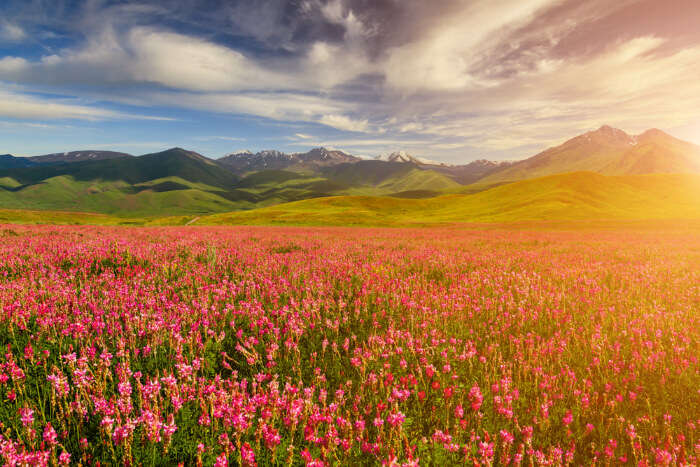 Valley of Flowers in Uttarakhand

If you trek in the Himalayas in March or April you come across these mesmerizing flowers in full bloom. The red, pink, purple sheet of Rhododendrons is just surreal to look at. The Goecha la pass trek is one that really puts you in a romantic mood with nature when you come across rhododendrons in the forest. 7. Starry skies to put you to a dreamy sleep

This is one of the best reasons why you should trek the Himalayas. Living in towns and with so much pollution around us, it gets really tough to come across a clear sky. But in the Himalayas, once night falls, you see millions of stars twinkling in the sky. While camping and taking rest from your trek in the night, it’s the best feeling of serenity when you look up at the sky. 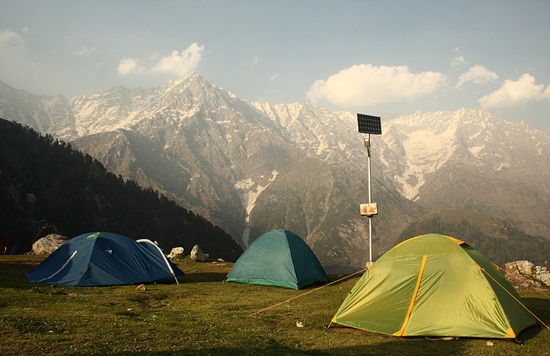 Trekking always makes you realize the worth of your body and health. It helps you understand how much your body can take. Himalayan treks are such where you need to fall into a fitness regime before the trek, on the trek and also after it would be a good thing. Generally, it is good to change if you have not been into exercising. The Himalayas can be one good motivation. 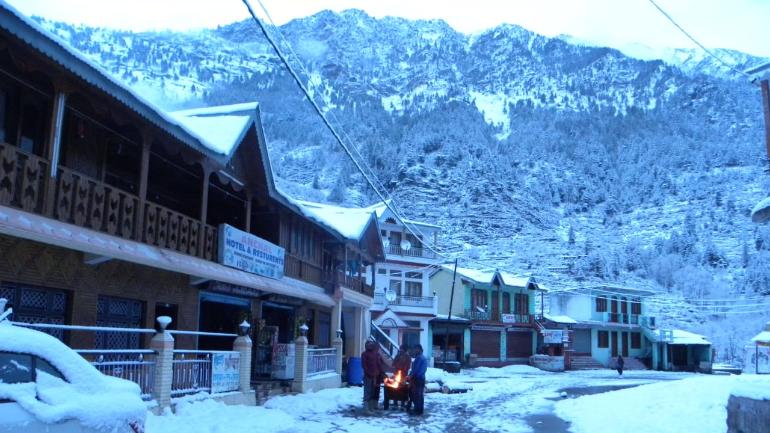 Who would not want to experience weather like that!

It really does feel very soothing when you visit a monastery and hear the soul-stirring sounds of Om Mani Padme Hum in the background. The fluttering prayer flags, the chanting of the Monks give a very soothing feel to the monasteries. Be it Ladakh or Spiti, monasteries and Buddhist culture are mystifying and the Himalayas is where you find it all in it’s the purest form. 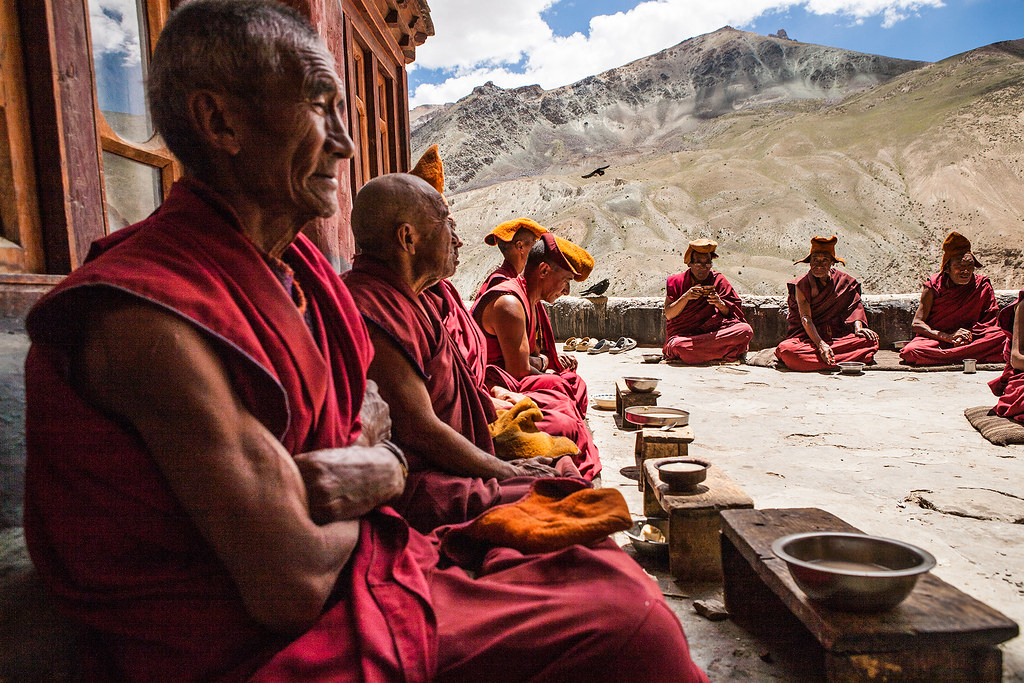 Lamas getting ready for lunch at Phuktal Monastery

The Himalayas have no dearth of stories and legends. From being considered to be the birthplace of the mighty Ganga, to Mount Kailash is the abode of Lord Shiva, to a long history of Buddhism, the Himalayas have many enchanting stories. One of the famous legends or enigma of the Himalayas is the Roopkund trek where there are skeletons found when you reach the lake.

The Himalayas is what attracts the explorer, traveler and the curious soul in you. It’s the best place where you find a newer version of yourself and you surely come back home with beautiful mesmerizing memories. So just leave all the stress behind and trek in the Himalayas this season.

If you have any other reasons to go visit this heavenly place then do let us know in the comments section.