Roll ball is a sport similar to basketball or handball that is played on the quad or inline skates. The play consists of two teams of six players each, five field players and a goaltender. Players move toward the goal while dribbling or passing a ball similar to a basketball, with the aim of throwing the ball into a goal at each end of the court. The team that is able to score more goals wins. There are two referees in a match. The ball can be held in either one or both the hands, even during passing and shooting. Player interaction is similar to basketball in that a player must dribble the ball while carrying it. A player may dribble, pass or throw the ball with single or both the hands.

Helmet and knee pads for all players, and a chest protector for the goalkeepers.

It is an actual basketball... 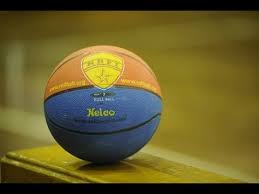 A timer that can be seen by both players and spectators.

The playing area of Roll Ball

Maybe concrete, wood, ice or clay — therefore any hard surface. The area is a rectangle on a hard surface, therefore free from any obstacle. The maximum dimensions are 28×15 m, and similarly the minimum dimensions 25×12 m for U11 and U14 categories.    It has to be between 40×20 m and 35×15 m for U17 and senior categories. Therefore The lines are 5 cm wide and are all drawn in the same color. They are not part of the playing area. 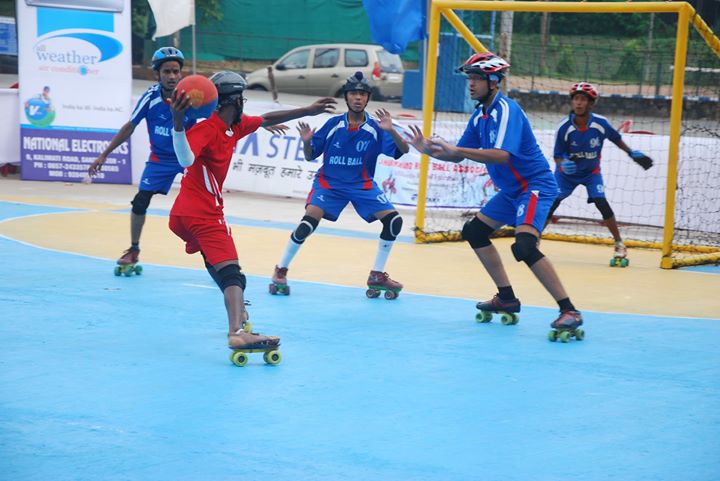 Two teams of 12 players face each other. For each team, there are 6 players on the field and 6 on the bench. Similarly the aim of the game is to score the maximum goals in the regulation game time. The ball can be held with one or two hands, even during passes to other players. The players must make it bounce on the ground. The ball can be passed, thrown, hit or dribbled in any direction. Backward passes are allowed. A player may hit the ball in any direction with an open hand. The ball must cross the goal line completely for the goal to be validated. After a goal, the game starts from the right corner.

In case of a tie, two extra times of 5 minutes are added with a 2-min break in-between. Just like in soccer, dangerous actions are sanctioned, first by a yellow card, then by a red card.

Two world cups have already taken place. Almost the last one was held in Kenya in 2013, with 30 nations.

The organization announces 50 nations in the running for the 2015 edition, that will take place in the cradle of the discipline, in Pune, India.

Above all Afro-Asian Roll Ball Championship

There is also a competition gathering both Asian and African continents.

The last edition took place from November 27 to 30, 2014 in Uganda, under the aegis of Uganda Roll Ball Association, at the MTN Arena Lugogo Kampala, a big sports hall.